People are turning to industrial hemp as a possible greener alternative as they become more conscious of the environmental implications of conventional materials like cotton. Hemp fabric is a natural textile derived from the Cannabis sativa plant's stems. Everything from T-shirts to undergarments is now made from hemp cloth.
Hemp has a dual appeal: it is an environmentally friendly fabric that provides significant benefits to the user. The material is biodegradable and one of the strongest textiles, making it excellent for use in apparel. It offers high insulating, UV protection, and anti-bacterial properties.
What is equally important, it comes from a naturally renewable source. Although the production is labor-intensive, industrial hemp is considered one of the most sustainable crops worldwide.

What is Hemp Made Of?
How is Hemp Fabric Made?
What is Hemp Fiber Used For?
Hemp Fabric Properties
How to Care for Hemp Material Clothing?
FAQs
With the signing of the 2018 United States Farm Bill, the popularity of the woven hemp fabric rose. Hemp's future also appears promising, as its applications extend beyond clothing materials.

Hemp Clothes and Textiles at Hemptique

Welcome to Hemptique, the best range of hemp clothing and accessories on the planet. Hemp is a versatile natural fiber with a variety of uses. Hemp clothing can be as soft and comfortable as cotton, but unlike cotton, it will not shrink or fray. It is naturally resistant to mold and insects, making it perfect for active wear. With our quality materials, you won't need to worry about your hemp clothes ripping, shrinking or fading. Our products are naturally sourced, cruelty-free and ideal for both men and women.
For more information about hemp woven fabric, knit fabric or how to apply for a wholesale account, call 1-760-602-4864. Ext. 403 and 405. Sustainable fashion is here to stay with Hemptique!

sales@hemptique.com
(760) 602-4864
The stems of the Cannabis Sativa plant are used to make hemp cloth or textile. The Cannabis Sativa fiber used in eco-friendly clothing has a minimal THC content. Cultivators purposefully lower their crops' levels of psychoactive THC. The technique of breeding this variety results in stronger fibers for fabrics and apparel. Industrial hemp is the name given to the cloth produced as a result of this process.
Hemp has been grown by humans since ancient times. The cultivation of hemp for seeds differs from the production of hemp for fiber. Farmers sow 300,000 plants per acre close together for fiber production. This equates to around 150,000 plants per acre in terms of seed production. The plant is harvested using special machines during the early to the mid-flowering stage. Some studies reveal that fibers from female plants are a bit stronger, while the male thread is finer.
After harvesting, the stem is placed on the ground for several weeks. This process is called dew retting and serves to decompose the pectin, a substance that binds the hemp fiber. They are baled and sent to a different place for processing when they reach a moisture level of 12%. Also, some use alternative retting techniques involving water or chemicals. It is much faster but not so eco-friendly as dew retting.
The next step in the process is decortication. When the stems are wet from retting or after they have been dried, they are decorticated. Decorticating hemp fiber entails removing the central woody core from the stem's outer layer. It basically removes the damp fibers from the core while the stems are still wet. After that, the stems must be dried. Drying the stems and passing them through a special machine is also possible. This process separates the fibers from the woody core. 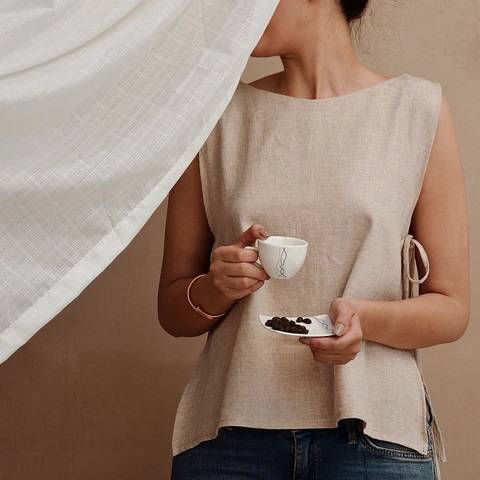 After removing the fibers from the woody core, the farmers form them into bales. After that, they pull the fibers out of the field to be processed into yarn. Chemical or mechanical procedures are currently used to soften and increase the flexibility of the fibers. On the other hand, some manufacturers just spin the fiber without further treating it.
To assure fabric softness, lignin had to be removed from hemp fiber. Lignin is an organic substance found in large amounts in wood and gives plants their woody appearance. This component increases a plant cell wall's rigidity. The scratchy and rough texture of traditional hemp fiber is also due to lignin. This gives the hemp cloth its strength and toughness. The lignin is removed from hemp fabrics to make them feel softer and smoother.
Then, the fibers are spun and twisted together by special machines to generate long threads that are woven into fabrics. Blending, in which additional fibers are added and blended with the hemp before turning it into hemp clothes, can occur at this point. To do this, manufacturers traditionally employed a hand-spinning method. The distaff and the drop spindle were the tools they utilized.

Textiles have been made from hemp fiber since ancient times. It is less expensive than most organic fabrics and far more environmentally friendly than chemically manufactured textiles. Hemp cloth is also suitable for sensitive people and does not create allergies. We have an heirloom from civilization's past that demonstrates how diverse artistry existed to create exquisite hemp textiles. Hemp fabrics are frequently embellished with ornate designs and patterns to make them unique.

Hemp fibers have been used to build shoes that give both comfort and durability, as strange as that may sound. Shoes bear the majority of our weight and wear out quickly. Leather is a material that has been used for a long time to manufacture long-lasting shoes. However, leather, which is essentially processed animal hide, is expensive, and the process of making leather from animal skin is not only time-consuming but also pricey. As a result, choosing a less costly and more environmentally responsible choice is critical. Hemp fibers are a far better solution than synthetic materials like rubber or reusable polymers like plastics, which numerous designers and shoemakers have tried.

Hemp fibers can be used to produce ropes and cords because of their high tensile strength. Hemp was an easily available fiber for making ropes, which was a common product. Although other fibers, such as coconut and jute fibers, have been used for biodegradable ropes, nothing compares to hemp. Ropes and coils have also been used to create stunning works of art, like macramé. Ropes are not just woven to tie or hang objects; they have also been used to make ornate artifacts. Hemp ropes have also been utilized in the past for similar purposes. With the world of hemp fibers, we are witnessing a new age in design. Experts believe this versatile resource will be used in more and more products as the modern world seeks out new ecological materials.
Paper
Hemp fibers are most commonly used for creating paper. This resulted in widespread deforestation. Hemp fibers aid in the resolution of this issue. Because hemp is fairly simple to grow and not expensive to cultivate, it may be used as a raw material to make high-quality paper sheets. This would serve as an organic and natural supply of paper, one of the most important materials in daily living.
Considered an environmental 'super fiber,' hemp creates some of the most eco-friendly textiles in the world. It produces far more fiber per acre than both flax and cotton. Let us show you some of its advantages:
Now, let's look at some hemp fabric disadvantages:

Using hemp clothes, you can actually get several wearings from one cleaning due to its durability and natural odor-resistance.

Where to Buy Clothes Made of Hemp?

Hemptique offers hemp by the meter, hemp craft supplies, kitchen and bath items, and hemp apparel and accessories. Our customers have the opportunity to promote sustainable fashion with a premium feel and look through our premium quality t-shirts, bags, shoes, beanies, and hats. We mix durable hemp textiles with premium finishes for a look that will last for years, far beyond the lifespan of other materials.
VIEW ALL
Is Hemp Fabric Soft?
Hemp fabric is very soft but also quite durable, as the fibers from this plant are long and tough. It is known for becoming more delicate and more comfortable over time. While a regular cotton T-shirt lasts 2-3 years at most, a hemp T-shirt may last double or triple that period.
Is Hemp Natural Or Synthetic?
Synthetics, unlike natural fibers, are retrieved from deep inside the Earth, removing the farmer from the equation. Hemp, on the other hand, is renewable, biodegradable, and environmentally friendly. Hemp fibers are among the strongest natural fibers in terms of mechanical qualities.
What Makes Hemp a Sustainable Option?
Hemp is a natural plant fiber produced from the Cannabis plant's stems. Hemp is the least unfriendly to the environment in terms of sustainability. Hemp is a low-water crop that replenishes soil nutrients and helps to promote soil health. It is also biodegradable and one of the more durable textiles, so we have: